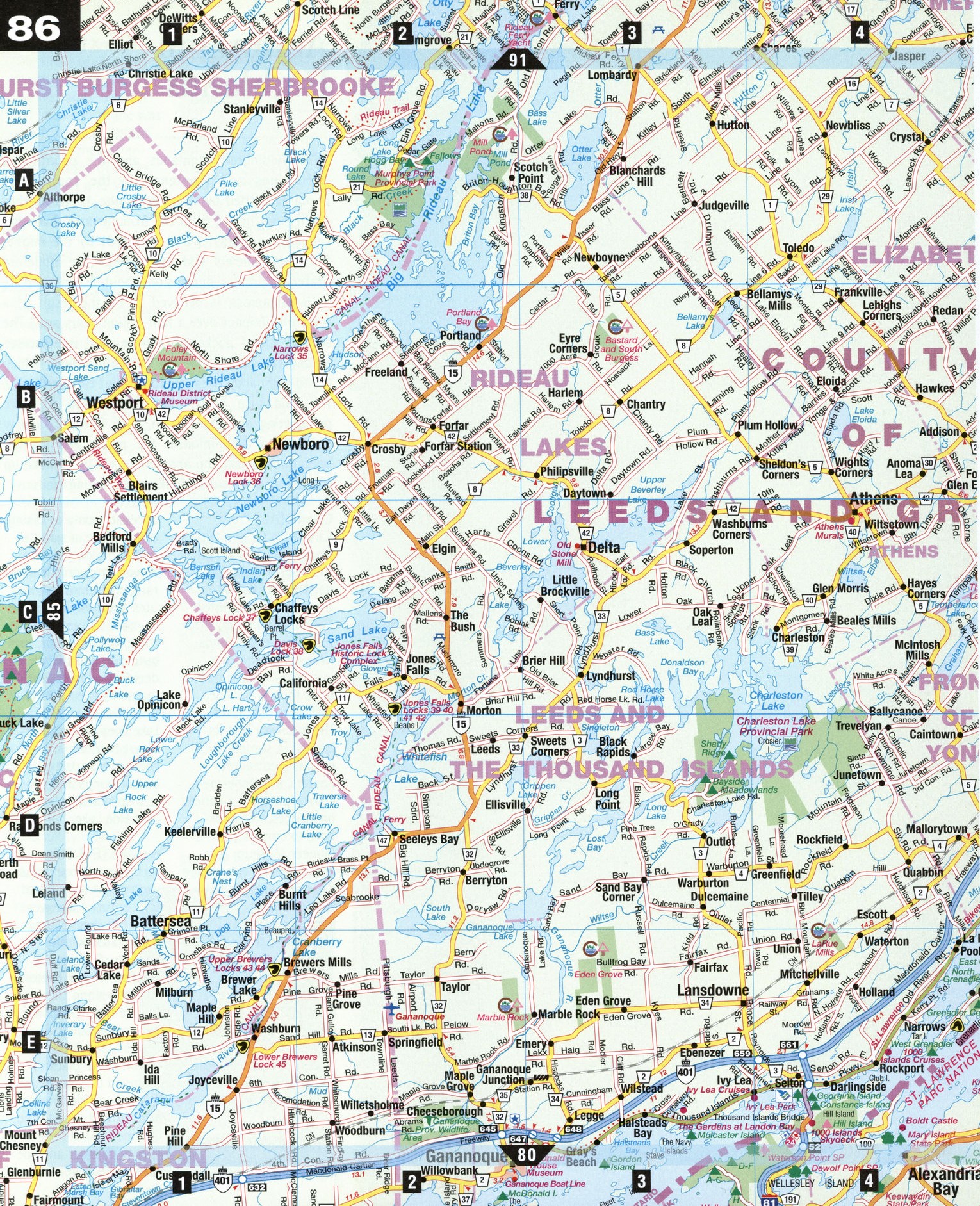 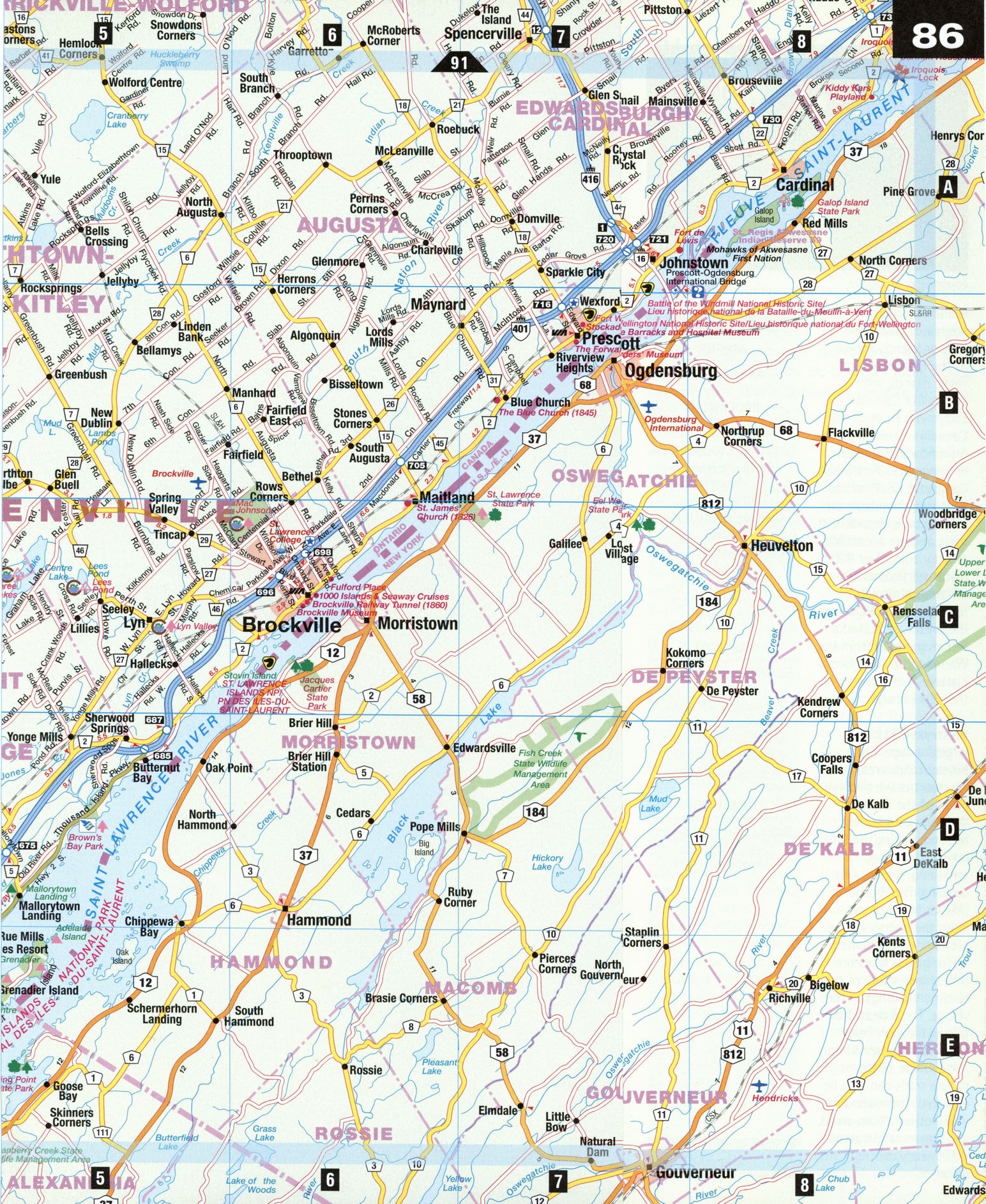 Large scale road map of Brockville (Ontario, Canada)
Map of Brockville. Detailed map of the highways and roads of Brockville (Ontario, Canada).
Rideau Lakes
One of the most scenic waterways in North America, the Rideau  Canal Waterway is a series of rivers, lakes, and connecting locks and  canals that form a continuous waterway between Kingston and Ottawa. It  is 202 km long, of which only about 19 km is man-made, the rest being  natural waters. Built between 1826 and 1832, it predates the locks on  the St. Lawrence. It is the oldest continuously operated canal in North  America and most of the locks are still operated by hand, using the same  mechanisms that were used in 1832. East of the Rideau Lakes, a wealth  of historic and recreational attractions awaits visitors along the St.  Lawrence River, from a national park that is a boater's paradise to a  relic from the War of 1812.
Athens [C4] Over 5,000 visitors a year come to Athens to see 11  unique murals painted on buildings which depict the hamlet's history.  Begun by local artists in 1985, the murals capture small-town events  such as the heyday of the local sawmill, Turkey Fair Day, or an idyllic  picnic on Charleston Lake.
Brockville [C6]  Ontario's oldest incorporated municipality, Brockville  was founded in 1784, and named after Maj. Gen. Sir Isaac Brock, a hero  of the War of 1812. It has since become a popular center for boating and  diving activities in the St. Lawrence River. Several heritage  structures have been preserved or restored, including the County  Courthouse (1842) and Canada's oldest railway tunnel (1860). Historic  Fulford Place, an enormous 1,860 m2, fully furnished Edwardian mansion  was originally financed through the sale of a cure-all remedy, "Pink  Pills for Pale People." The Brockville Museum has displays from one of  the river city's earliest homes.
Prescott [B7] Founded in 1810 on land granted by England for Loyalist  support, Prescott has many heritage homes, an historic shopping  district, waterfront parks, and a modern 148-slip marina. At Fort  Wellington National Historic Site, costumed guides interpret daily life  at the 1840s fort—originally constructed to protect Prescott during the  War of 1812—with its earthen ramparts, three-story blockhouse, and  officers' quarters. Prescott has also become a popular spot for scuba  diving, due to beautiful clear waters and historic wrecks. Six and a  half kilometers east of Prescott, the International Bridge links Ontario  with Ogdensburg, New York.
St. Lawrence Islands National Park [E4-E5]
Situated in the heart of the Thousand Islands area, St.  Lawrence Fountain in Brockville  Islands is an 80 km stretch of granite  hilltops or islands known as the Frontenac Arch. These islands, with  names like Camelot and Endymion, connect the Canadian Shield with the  Adirondack Mountains in upper New York State. Campsites on 11 of the  islands are available on a first-come, first-served basis and are  accessible only by boat. Over 800 plant species and 65 different birds  can be found in the park, as can the preserved hull of a British gunboat  from the War of 1812. Area family histories are recorded in the park  library.
Westport [B1] The largest village in the Rideau Lakes area,  Westport is the midway point of the Rideau Waterway, and offers boating,  fishing, golfing, hiking, shopping, antiquing, dining, and dancing. The  Rideau District Museum provides the history of the area and a  self-guided walking tour brochure that shows many of the historic  buildings in the village. The Rideau Trail passes through Foley Mountain  Conservation Area, where other nature trails can also be explored.  There are also many other towns, parks, and conservation areas within  easy driving distance.
ATTRACTIONS
ATHENS
Athens Murals
BROCKVILLE
Brockville Museum
County Courthouse Brockville Railway Tunnel
Fulford Place Carriage House Hotel (1820)
Victoria School (1855)
1000 Islands and Seaway Cruises
St. Lawrence Stage Company
PRESCOTT
Fort Wellington National Historic Site Forwarders' Museum  Stockade Barracks and Hospital Museum Ephraim Jones House International  Bridge
WESTPORT
Rideau District Museum
Foley Mountain Conservation Area
Back to content